Hookin’ At the Movies

This week’s stills are from yet ANOTHER Ingmar Bergman-directed movie, Jungfrukällan, AKA The Virgin Spring (1960). This  gem inspired two other great (but less subtle) films, Last House on the Left and I Spit on Your Grave. It also inspired this week’s Movie Still Monday post with its sweet drop spindle action! 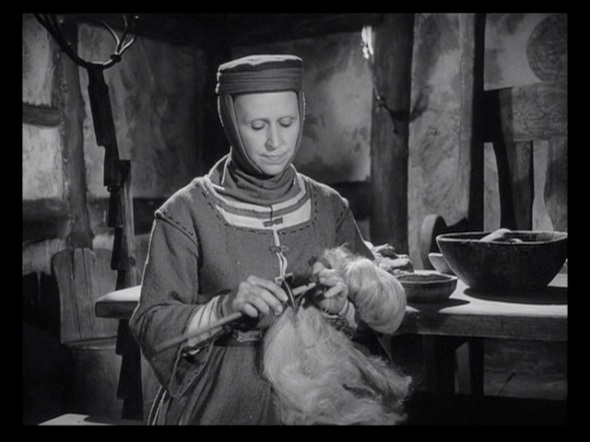 Spinning wheel? Bah. That is so 11th century. This was the only way to make yarn back in the day. 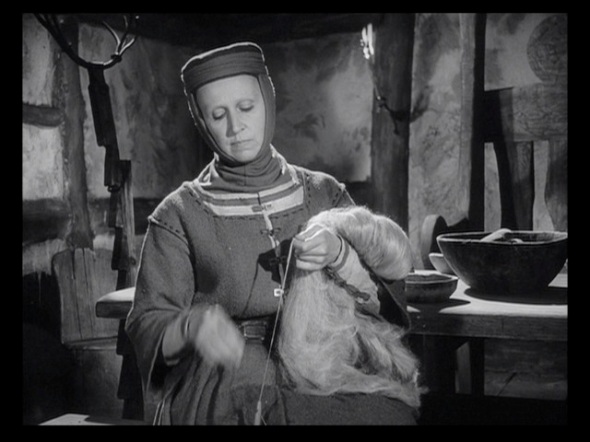 Being a hand-spinning spring virgin myself, I couldn’t really tell you exactly what she’s doing here. 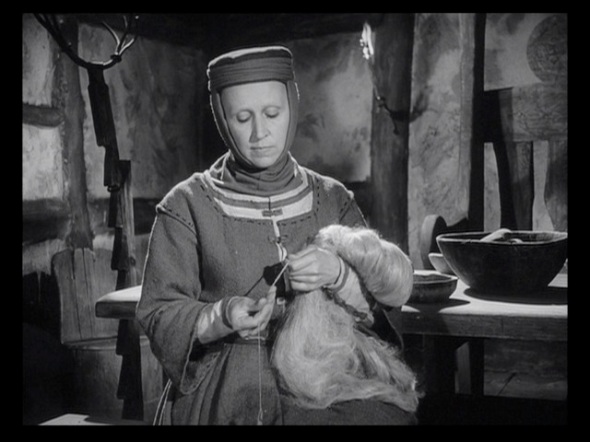 But actress Birgitta Valberg definitely looks like she knows what’s going on!

Multitalented or merely a consummate thespian?

Somewhere off in the wings, during a Swan Lake dress rehearsal… 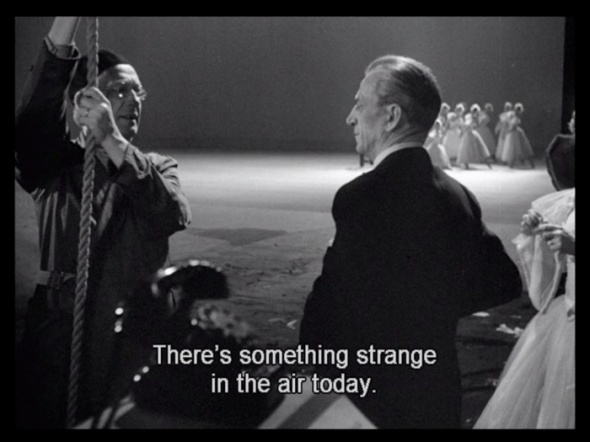 You said it, dude. Just look off to your right a little and you’ll find out why!

Ah yes, there she is, a knitting ballerina — something strange indeed. Well, she’ll have put down her WIP to go out on stage in a minute. Bummer! 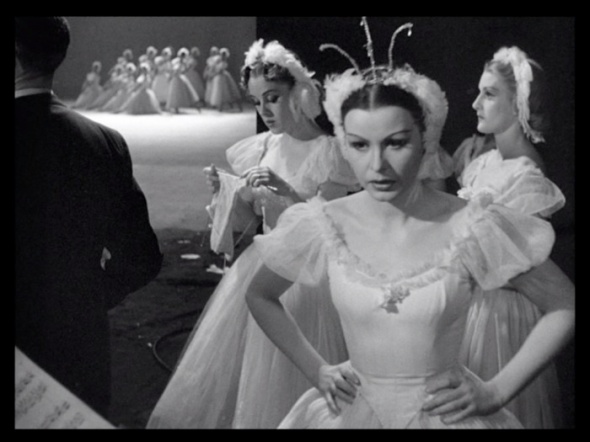 Better stop and count those stitches before she has to frog the whole damn thing; now THAT would be a tragedy!

New bride Juliette is knitting onboard her hubby’s canal barge. A sweater, peut-être? 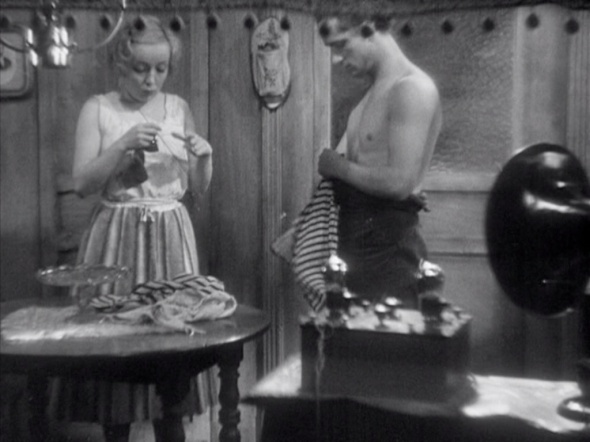 Well, you know what they say: if you’re going spend the time needed to knit a sweater for your man, make sure he’s a keeper. 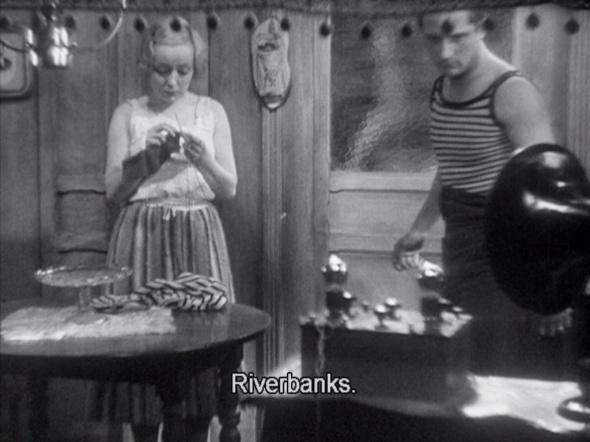 And of course, don’t forget to take proper measurements. 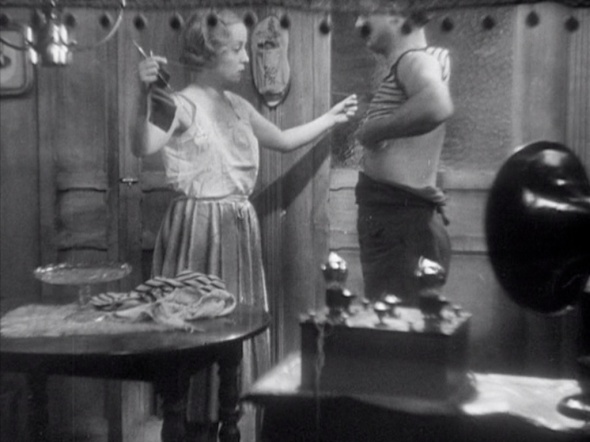 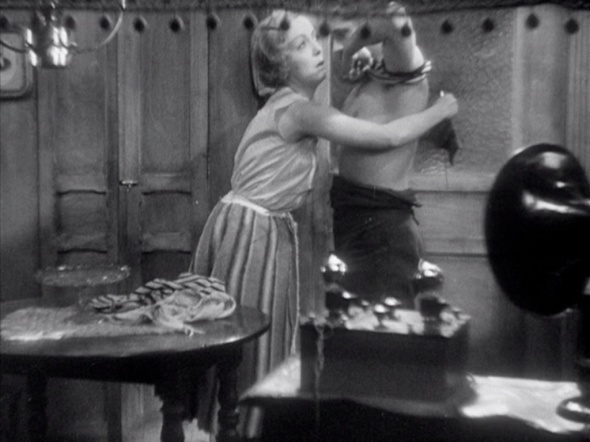 Later, Juliette sports a très belle crocheted shawl as she sits morosely meditating in the fog.

But why so glum, Tristesse? 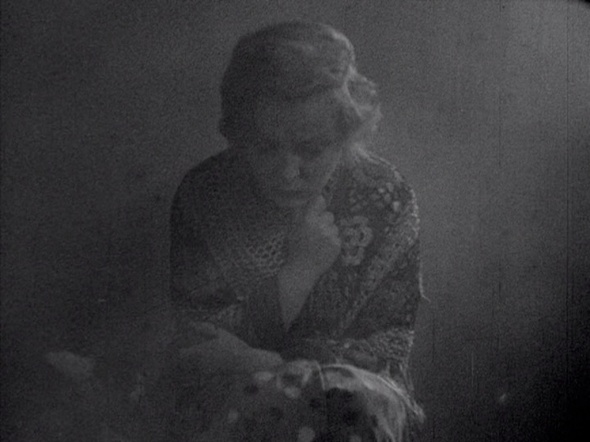 It could be that whole “newly married and living on a canal barge filled with cats” thing.

Or maybe the sweater didn’t fit.

In this scene, novitiate Viridiana has a somnambular journey, walking into her uncle’s room with a basket of tasty looking yarn. (Don’t let the gams distract you.) 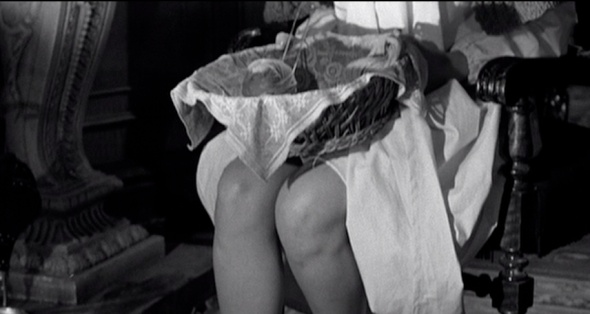 But instead of doing some sweet sleep-knitting with her nocturnal stash, she immolates it in the fireplace! 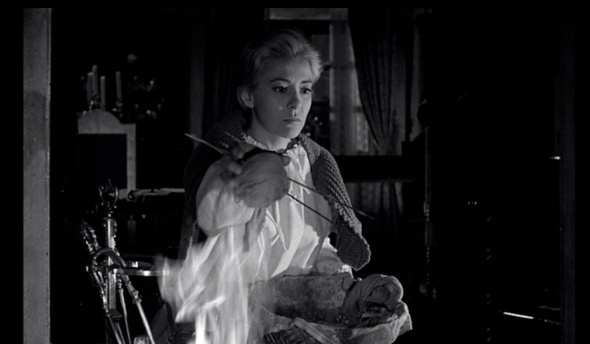 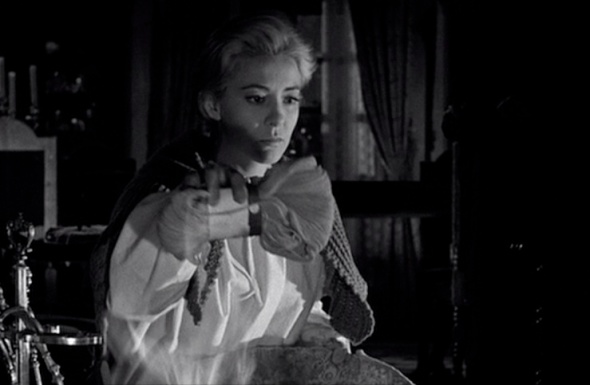 Patty’s mom Natalie curls up on the couch with some needles for some “woman’s work.”

At least I think that’s what they called it back then. 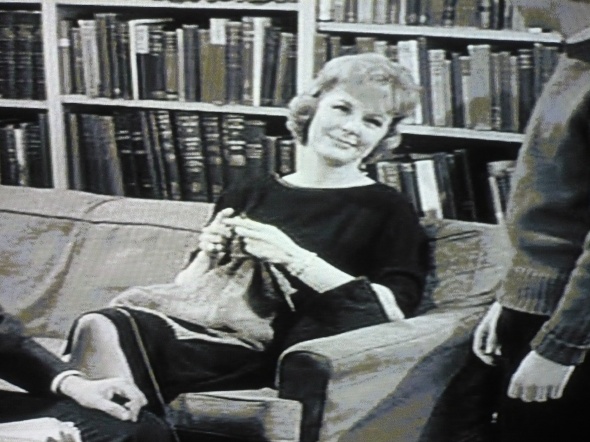 Sergei Parajanov’s 1968 masterpiece The Color of Pomegranates (Sayat Nova) is not only one of the best films I’ve ever seen, it is also one of the most craft-laden films I have ever seen! 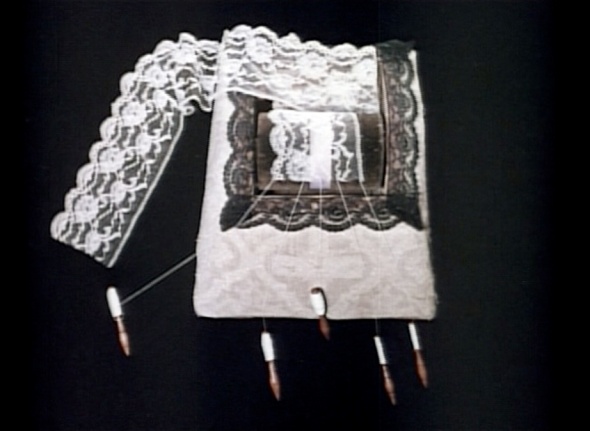 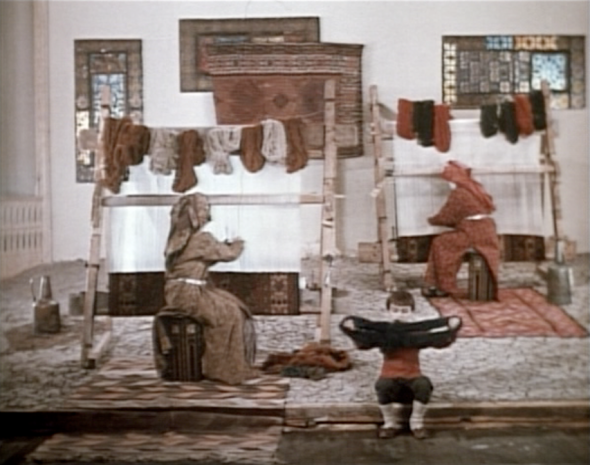 Some holier than thou knitting angels (work those toe-up socks, kids!)… 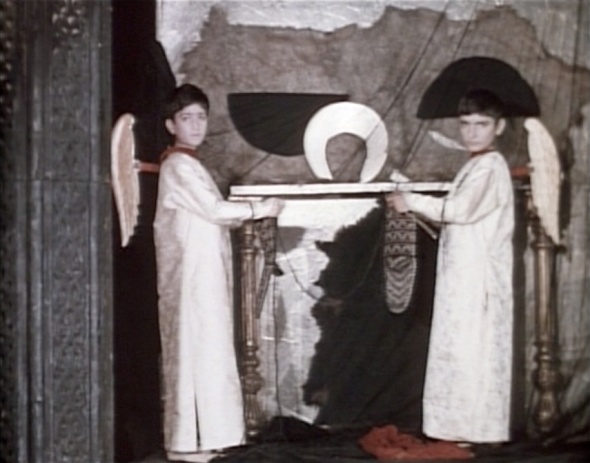 …complete with their “close-knit” family members. 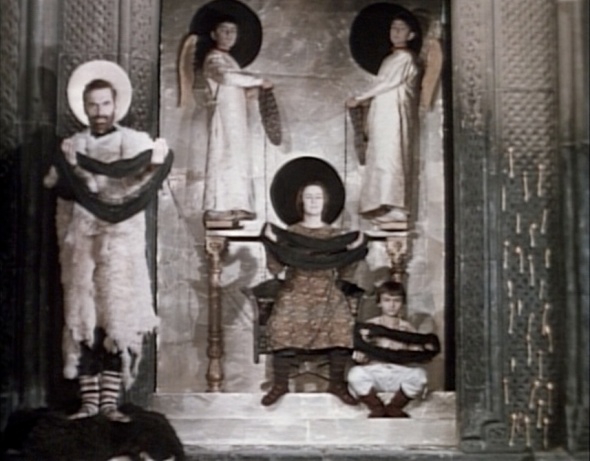 It even features the yarn making process, beginning with the fleece… 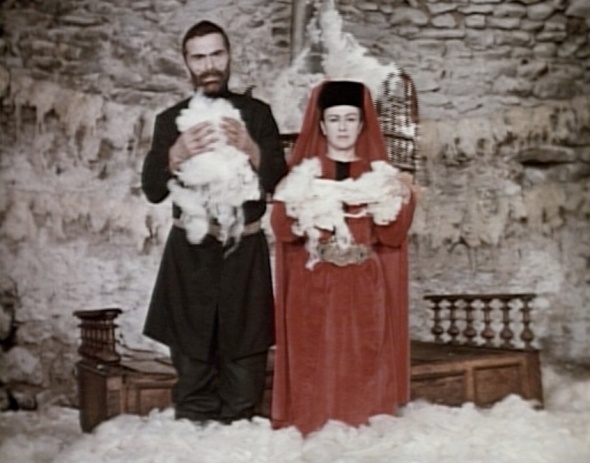 …up to the dyeing process. 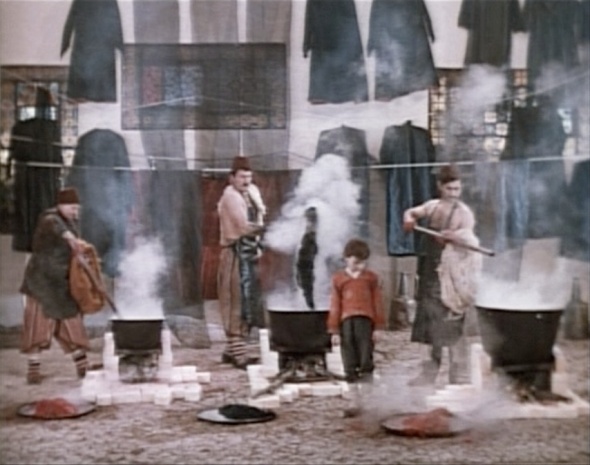 And, of course, more hanks of yarn than you can shake a kemenche at. 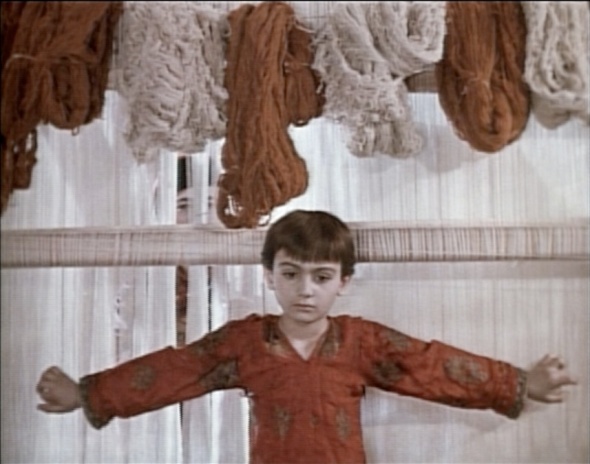 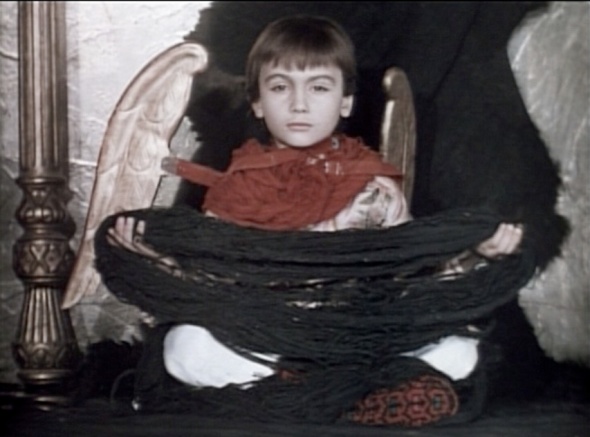 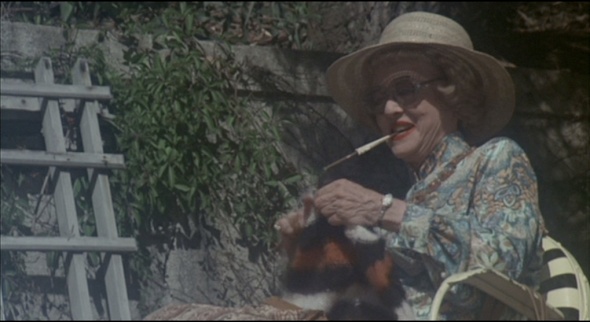 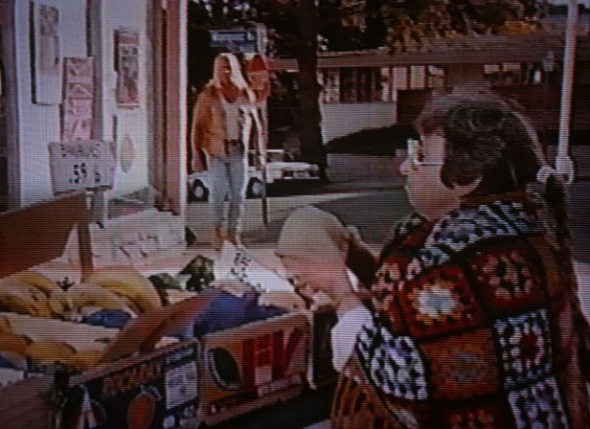 Bet you can tell she’s a granny from those squares she wears, huh? Huh? This seems like a typical case of Hollywood  ageism mixed with some severe craft stereotyping… real crochet-cism in action! I mean, when will these pesky movie PA’s realize that crochet is ageless — and more importantly — that an afghan does NOT a shawl make?

New segment: Hookin’ at the Movies

From A Cinderella Story: Once Upon a Song : 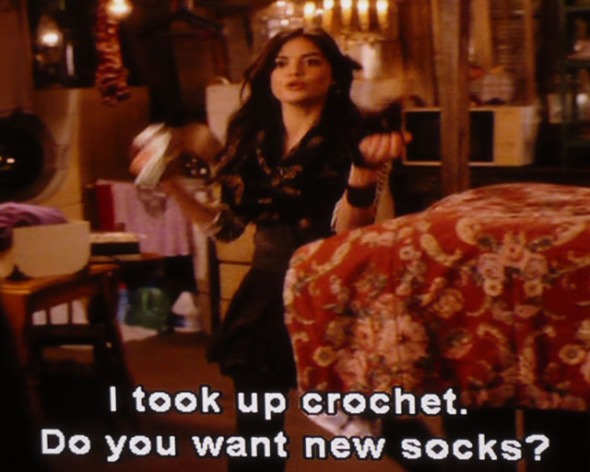 Ooooh… no thanks. Socks crocheted by Lucy Hale sound about as appetizing as a macrame bra made by Selena Gomez.