Just For the Record… Happy Anniversary

One of the greatest record stores in the country, Denver’s Twist and Shout Records, just celebrated their 25th anniversary! Being a former employee and huge fan of the store, I decided to make a token of my appreciation to the store owner, Paul Epstein, pictured below. 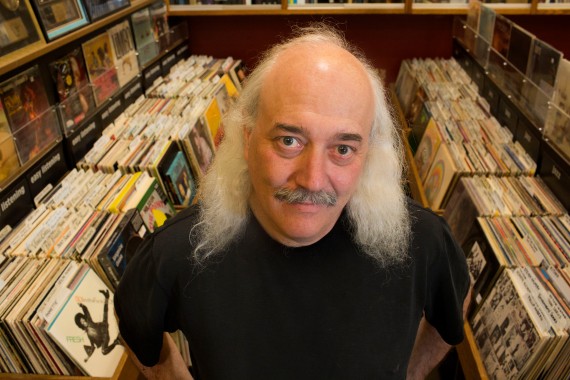 He even comes with its own detachable (felt) vinyl record… in mint condition, of course! 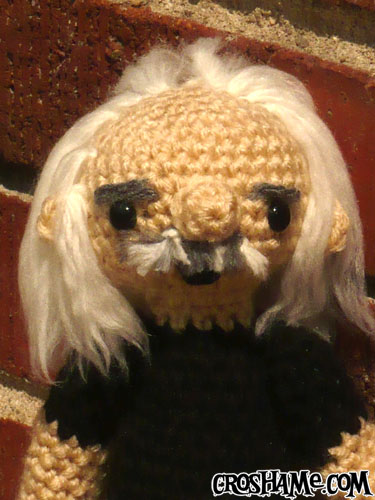 Paul is not only a great guy and an awesome boss, but he also owns a really amazing store with many incredible and extremely knowledgeable employees ready to help you with even the most obscure questions. So if you’re in the Denver area, stop by and browse their magnificent collection of music, movies, books and toys. And hey… tell ’em Croshame sent ya!

Bring in the Spring with a Ring! 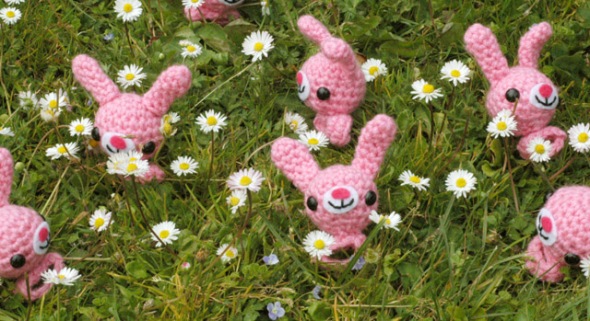 Since the Easter/Eostre/Ishtar time festivities are almost upon us, I thought I’d remind “peeps” about the Bunny Ring pattern and tutorial I posted here last year. It’s an easy pattern and very quick to make, so feel free to make a bunch, stick them in those plastic egg thingies and hide them in the grass for all those tiny Easter hunters and gatherers in your life. (Just make sure your pets don’t eat them; trust me, they’ll try.)

I’m excited to announce that I will be featured in the upcoming Luvable and Hugable annual group show at Gallery Hanahou, December 1st to January 6th in New York City! 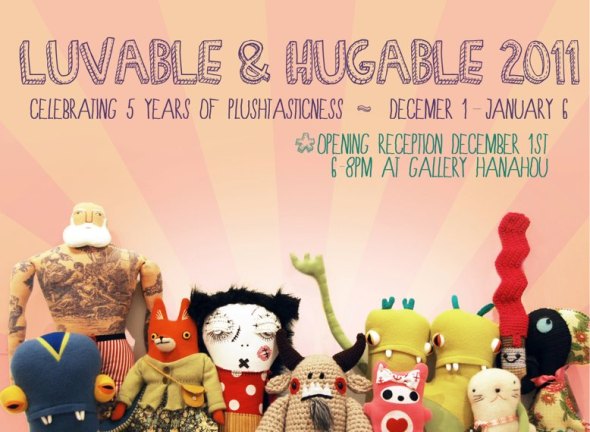 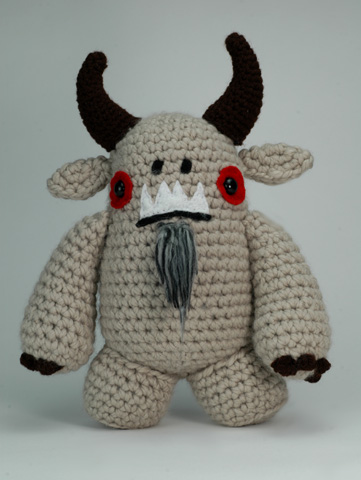 Next up, a big old Wolfy Baby! 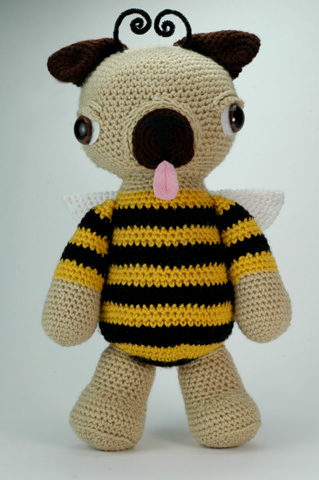 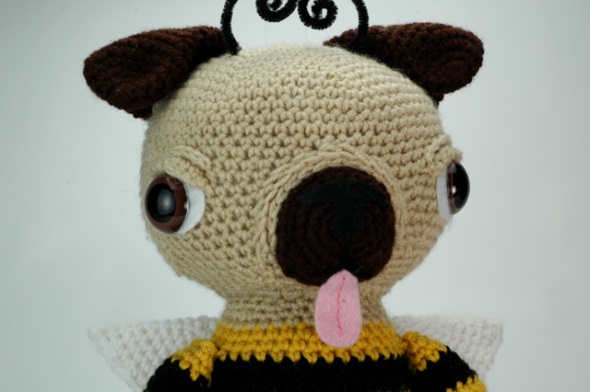 And last but not least, two figures from my Crocheted Friends Forever (C.F.F.) series.

And her pal Bree: 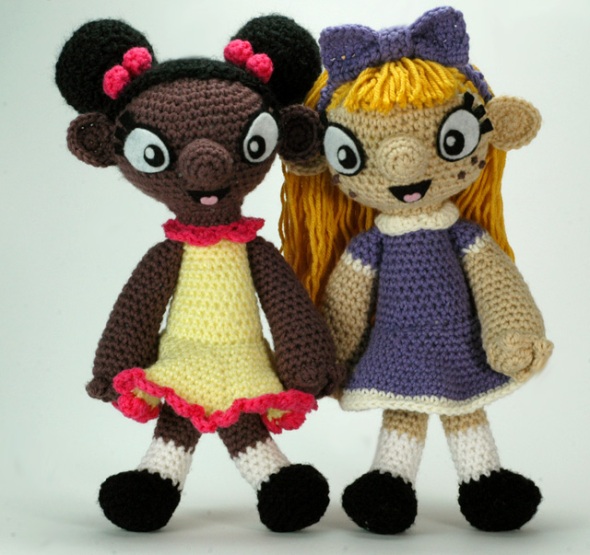 If you can’t make it over to the show in person, Gallery Hanahou has posted a pre-sale catalog for early buying! The link is here: Pre Sale Catalog  and the password is “welovehugging”.

If I remember correctly, there’s some big holiday coming up where people buy things as presents for others. Unless you’ve got some perverse fetish for being trampled by hordes of greedy Target shoppers, please consider purchasing your gifts at independent businesses and/or buying handmade!

A couple of months ago I was approached by an Etsy shopper who asked me to make characters from the 1978 Sidney Lumet film The Wiz. Being a total movie nerd, I immediately said yes, proceeded to watch the film about three times, and set about making the figures.

I made Dororthy (played by Diana Ross) and her little dog Toto: 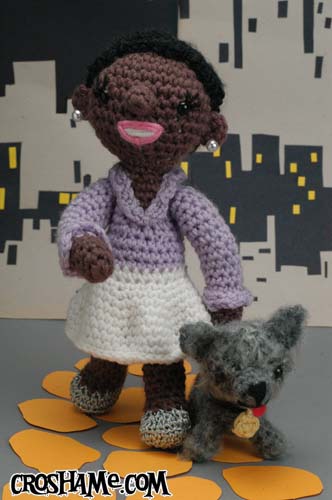 The Scarecrow (played by Michael Jackson): 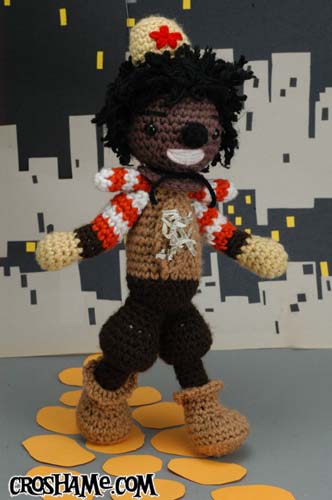 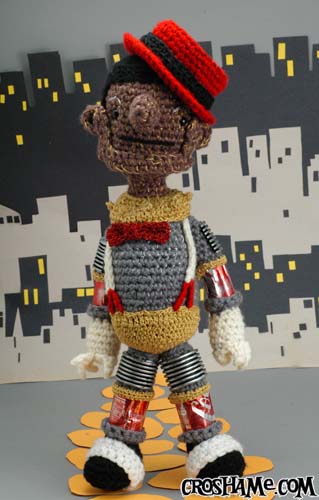 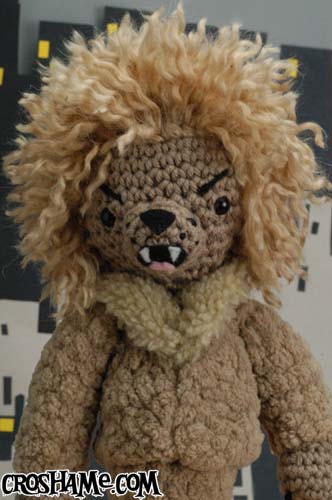 And the Wicked Witch Evilene (played by Mabel King):

If you’ve only ever seen the original Wizard of Oz, do yourself a favor and “ease on down” to your preferred viewing source (because video stores don’t exist anymore) and watch The Wiz!

Yeah, that’s right. I got artsy-fartsy with it and called it “sculptural crochet” instead of “amigurumi”. That’s just the way I’m living these days.

In this post I’m going to briefly touch on five of the things that have made my Antigurumi more aesthetically pleasing (crochet-wise, anyway), professional-looking (whatever that means) and all-around sturdier. Some of you blog-nerds may have already seen/heard these tips before from other bloggers and are probably using them already, so you can roll your eyes all you want, but they always bear repeating. To others who may breathe a hefty, beleaguered sigh and say, “But Shove, I just learned to single crochet!! I don’t have time for all this extra fancy nonsense!”, please know that these are SIMPLE things you can do to VASTLY improve the look of your work… and I think you will be pleased with the end results. Now, this is just a small “Top Five” sampling– there are many other things that have helped my crocheting significantly and maybe I’ll go over more of them in the future, but for right now I highly suggest trying to implement these tips into your daily crocheting repertoire and see how they work for you. Although I currently have no time/patience/energy to make my own instructional videos, I have provided some links to other gracious souls’ teaching tools that illustrate these points perfectly. Enjoy.

1. The Magic Ring or Double Loop

While the “chain 2, sc 6 into the 2nd chain from the hook” is the easiest way to start off a piece and generally the method that beginners learn first, it can leave a wee gaping hole in the top (or bottom, depending on which way you work). To alleviate this dilemma, try thinking about the Magic Ring or Double Loop method, both shown in this instructional video by  wiremysoul below. (I generally go with the Double Loop.)

Okay, so you’ve just made your third stuffed penguin or whatever, and you’re super proud of the results. It’s much better than your first attempt, and slightly better than your second. But wait, what the hell are those irritating little bumps showing on the front of the work? They are your decreases, and they hate you. They want to mock your hard work and your very being by sticking out and saying “LOOK AT ME, DAMMIT.” Have no fear; there is a solution, and its name is the invisible decrease. Watch the instructional video from nerdigurumibelow.

Ah, the color change. A frustrating experience indeed. All the books tell you to just finish your SC with the new color on the last stitch, but you may find this leaves things looking messy. Sure, you could always hide the color change in the back somewhere, but it’s still going to be there, laughing at you. (Crochet is fond of mocking its creators. Take note of that.) Fortunately there is salvation at hand. This is actually something I discovered on my own very early in my crocheting history, but did not actually start implementing until my suspicions were confirmed by the wonderful Needlenoodles, who posted her photo tutorial up on her blog. She provides clear photos and written instructions to help you on your new jogless journey, which can be found HERE: Jogless Stripes Tute

When I first began using polyester stuffing, I would scrimp on putting a lot of it into my pieces, which resulted in a droopy, hollow and just-plain-sad-looking new crocheted buddy. But now, gentle readers… now I can look back and laugh, for I know the power of proper  stuffing. The real keys to success here are as follows:

A) Use enough stuffing to make the piece solid. Don’t stuff it to over-exertion, where it’s distorting your stitches, but just enough so that empty-feeling “squish” is gone.

B) Tear the stuffing apart before inserting to remove the bulkier shapes. This will result in a smoother, and less lumpy appearance on the outside. Particularly take this into consideration when stuffing large pieces.

C) Fill up your work completely — even if it means squeezing the stuffing through that last tiny hole that closes your work, which I like to call the crochet’s “anus” (or alternately, “crochet-nus”). I’m pretty sure no one else likes to call it that.

D) Find a stuffing brand you can live and get along with. For a while when I first started I was using a really soft, fluffy stuffing readily available at Joann’s and other chain craft stores (see mugshot below). This stuffing and I did NOT get along, which I should have figured out earlier from the disturbing photos featured on the front of the bag. I soon found that heavier, cheaper stuffing (often recycled) worked much better for me than the downy, fancy polyester fill. So, do some research, spend a few dollars (literally, like $3 or $4), and experiment until you’re truly satisfied. Who knows? You may find a nice harmony by sandwiching a layer of loftier stuffing in between two heavier ones. Crazier things have happened.

Poly-Fil: Thou art the enemy.

5. IF IT DOESN’T LOOK RIGHT, RIP BACK OR START OVER AGAIN!

To my knowledge there is no video or written tutorial for this, but it’s actually one of the most important pieces of advice I can give you. It’s probably pretty good advice for art and life in general, but for right now let’s just apply it to crochet. No, a four-year-old recipient probably won’t care if his crocheted frog’s left leg is fatter than his right, nor will you be banned from the craft fairs if you used a half-double crochet when you should have used a double. In fact, you may just be so relieved that you even finished the damn thing that you don’t really care much about your mistake. However, there also may come a time when you look at the piece and develop a nagging feeling deep inside your chest that says “That could have been done better.” Well don’t let that nagging sensation turn into a panic attack or ulcer — although it’s far too late for me. Realize that anything can be (carefully) taken apart and put back together properly with a little time, some sharp scissors and a decent attitude.

Remember: It’s not Krazy Glue, it’s not concrete, it’s not bronze… it’s just yarn. And while that in itself may be the most essential tip of them all, it can also be the hardest to remember.

The Bunny Ring: A pattern and tutorial!

Nothing says Easter Sunday like some Silly Pink Bunnies, so in celebration of the season I’ve created my first Croshame pattern, a Bunny Ring!

The written pattern can be found here: BUNNY RING PATTERN

To go along with the pattern, I’ve created a little video accompaniment! (The pattern is in there somewhere, I swear.)

It’s my first venture into both the pattern-writing and video tutorial arenas, so they might be a little rough around the frayed, stained edges — but in the end, it’s all bunny love, baby. That, and some 20+ hours of editing. Enjoy!